This is the 4th post in the series of posts relating to work which would have been presented at our 2020 conference. Here Linda Chadderton of UCLAN outlines here fantastic Legally Bound Escape Room as a learning and teaching tool. Linda’s project was nominated for the 2020 Teaching Law with Technology Prize which the ALT awards together with Thomson Reuters and we were all looking forward to hearing more about Linda’s work in Stirling. While that was not to be, you can read more about the project below and some of us were also able to join Linda as she outlined the Escape Room concept at the #ConnectLegalEd Hangout this week. Please feel free to leave comments or questions for Linda.

Having started at the University of Central Lancashire the previous year it was at my first ALT conference, watching a cascade of inspirational speakers that a novel idea came to me. I was keen to retain enthusiasm and engage my students from the outset. The germ of an idea suddenly formed whereupon a legal treasure hunt could be developed which saw the students solving clues, constructively aligned to the module materials where learning could take place almost incidental to the teaching process.  This would involve the students engaging with problem solving, using knowledge of the subject matter to escape the close confines of a classroom or teaching space.

Having voiced my idea to the Legal Systems Module Leader, I sparked his interest and soon begun developing the idea of separate tasks using the formatted questions within the Module. Encouraged by discussion our aims also needed to ensure that students worked as a team, that they were able to utilise textbooks, legal journals & legal search engines such as Lexis & Westlaw. They also needed to be able to think laterally.

This germ of an idea then had to be moulded into something that could be presented to the Dean of the Law School to obtain funding for the equipment. Equipped with an old Criminal Law textbook and a plastic gun I entered her office to undertake my ‘Dragon’s Den’ pitch for funding. Unperturbed by my plastic weaponry she listened intently & proclaimed that she was on board.

Now to draft the tasks…..into an hour slot with 160 students in teams of 10 at a time completing the workshop.

The theme of the escape room was quite simple. Set in the Moot Court room the students could be tasked with locating evidence to secure their client’s release. GDPR being the hot topic of the day I decided that their client, a university lecturer stood accused of racial profiling in her research. If convicted, she could incur a hefty fine. Her only hope was that her legal representatives – the students – find a memory stick containing the consent forms her research participants had completed, thus proving her innocence.

I had been impressed by reference to and use of technology within the teaching process by the delegates at the ALT conference at Keele in 2018. It seemed to me that we could harness the use of technology to ignite the students’ interest within our own escape room process.

As the notion of escape was central, I thought it only appropriate that the students started the process, themselves, needing to escape. So, 10 sets of handcuffs were purchased, the keys to which would be located when they cracked the first clue & unlocked a safe. The students needed to use their knowledge of case law relating to contempt of Court in respect of juries to solve the clue. They also needed to know the decision on appeal of the case. Once they had the code to unlock the safe, they would find the keys to the handcuffs, a jigsaw and a VR headset. Putting together the pieces of the jigsaw revealed the civil & criminal court structure with another code embedded.

The VR headset required instructions to use, with a directive that each student should solve one clue on the headset & pass the same onto another member of their 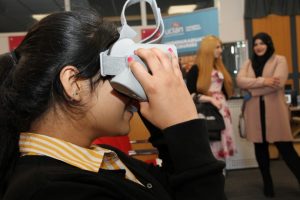 team. The beauty of this was that all students were involved, and the clues could be solved simultaneous. The VR headset revealed the Moot Court room in 360 degrees with willing actors (colleagues in the Law School) sat in the Judges seat giving short talks about various elements of the law. Within each video was a planted clue, from the physical to the sublime!

The code within the jigsaw unlocked a padlock on one of a series of wooden boxes within the room. The first wooden box contained a large magistrates court text & a surface pro. Within the book a plastic gun was secreted with a clue leading the students to recall s1 of PACE 1984, which they were told would give them the password to the surface pro. On successfully inputting the password the students would then be faced with two options, to either complete an online quiz or go straight to the online Court.

These applications were created by the Law School’s IT specialist. The quiz utilised a series of timed questions, that if the students did not answer in time would refresh. Having completed the quiz the answers revealed the name of a case which led them to a box of cards requiring them to place case law with case facts & outcome. From there they received a telephone number & an instruction to ‘call the judge’.

Calling the number revealed a pre-recorded answerphone message alerting them to the order of the court claim number which would ultimately lead them to a chatbot. The Chatbot identified itself as the online Court & the students had to answer legally themed questions in order to reveal a code which opened a locked box eventually revealing a memory stick with the necessary evidence to exonerate their client.

The escape room was trialled at a ‘Law & Emerging Technologies’ conference I had taken part in organising at the Law School in June 2018. Bemused at being handcuffed & having read their instructions my guinea pig volunteers set about cracking the first clue. Interestingly this  revealed amongst other items in the safe, keys hidden in the bag containing the jigsaw. In a previous trial with colleagues the keys had been plucked out of the bag & discarded. The volunteers did exactly the same. No one seemed to realise that they could open the handcuffs with the keys, and they continued to try & solve the next clue handcuffed together.

Using feedback from the initial trials the escape room was improved, for example, with the addition of chronological clue sequences. The overwhelming feedback was positive, with equal measures of  palpable enjoyment and frustration at the tasks. Undertaking curriculum review saw the Escape Room being given a further reworking and rolled out in Semester 1 Legal Method for the first-year students. Again, feedback was overwhelmingly positive. Elements that worked well were enhanced and elements that required further development were considered. What set about as an idea to engage and immerse students in the learning process saw a markable rise in attendance and engagement. Only some students escaped the room, but no students escaped the learning process! 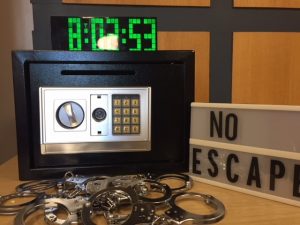