Our guest for this session on decolonial thought in legal education was Dr Foluke Adebisi, Senior Lecturer in Law at Bristol University. Foluke is the founder and director of FACE (Forever Africa Conference and Events) and blogs on (amongst other things) decolonisation, Pan-Africanism and legal education at Foluke’s African Skies. As someone who argues that the association between law and society is particularly overt in legal education, and that teaching should change the world, she was the ideal guest for the final session in the opening series of CLE hangouts that have run through the last four tumultuous months. 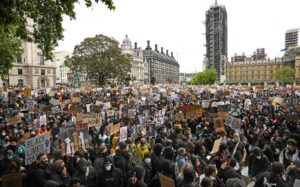 Foluke placed her message on decolonial thought in legal education in the contemporary context. This includes the UCU industrial action through the winter and spring that challenged the problems of casualisation and workload in higher education. It encompasses the Covid-19 crisis where mortality rates and economic impacts have highlighted racial disparities. She outlined how the killing of George Floyd and the global response have seriously strained the emotional wellbeing of racialised non-white friends and colleagues.

She drew on the example and the metaphor of the River Niger. It runs over the course of 4000 kilometres through five states and is the principal river of West Africa. It has existed longer than recorded history and millions of West Africans, including Foluke, and millions of their ancestors were raised within the Niger basin. Yet in history lessons, including those in schools up and down the banks of the Niger, children are taught that the river was ‘discovered’ in the eighteenth century by the Scottish explorer Mungo Park. Law can act as memory. According to Barack Obama, law records ‘a long-running conversation, a nation arguing with its conscience’.[1] Foluke sees law, particularly the common law its custom and precedent, as a time machine bringing the past into the present. We should be moving forward but the 8 minutes and 46 seconds of George Floyd’s killing show us the same state violence against black people replaying over and over again. Aeldra Zeta Yang

Racial justice and the decolonising process

The term ‘race’ needs close examination. It is not based on meaningful biological distinctions and seeing race as ethnicity is a cause of confusion: ethnicity is built on cultural norms that shift and flex whilst colour is immutable. Foluke explained race as a social construct produced by people over time. This raises the question of the function of racial classifications – they must be preceded by racism otherwise the classification serves no perceptible purpose. She developed this into an argument that there is racial illiteracy in higher education, largely because we don’t talk about race much beyond the (rather different) issue of diversity statistics. Instead decolonising thought is regarded as dangerous because it must have political effect, it must always be disruptive. This starts with an understanding of how history has brought us here. If law teachers do not reflect this in what we teach then we are part of the problem of an ahistorical, masked, sanitised version of law.

The different streams of decolonial thought are often reactions to the different experiences of colonialism in different states – a focus on the return of land and rights in settler nations such as Australia, concern with power asymmetries and socio-economic differentials in Africa and Asia, the de-centring of Euro-modern ways of being and knowing in South America. The unifying theme is the colonial tendency to commodify labour and space. This commodification of people, their time, their communal knowledge and their places, took place and is taking place by a process of law. The responsibility for a decolonising approach, therefore, falls on all law teachers.

The online environment and curriculum 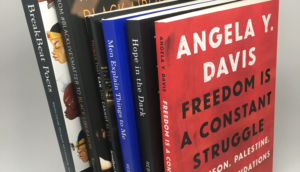 Foluke concluded by inviting us to see the new learning environments as an opportunity to change and to disrupt existing curricula. There are practical things open to us all such as engaging with decolonial literature or films in reading groups or film clubs, or by bringing these sources into mainstream substantive subjects.

Similarly, there are potential curriculum changes, such as the Law and Race option that runs at Bristol, or by showing how law is implicated in creating and sustaining racialised hierarchies in subjects such as Legal System, Contract Law, Criminal Law etc. These opportunities need to be balanced against the negative elements of higher education’s response to the Covid crisis. This has seen the commodification of our homes as University workspaces and the imposition of unequal and unwilling sacrifices of additional unpaid labour. This balance of hope, creativity, practical ideas and a sanguine view of the challenges facing us in legal education is emblematic of the approach taken by so many of our speakers in Connecting Legal Education sessions over the last four months.

This was our last CLE hangout before a summer break. We will restart in early September and aim to run a hangout every fortnight through what will be a unique and challenging year for us all. This isn’t by any means the end for Connecting Legal Education but it feels like the end of our beginning.

The three of us started an innocuous conversation on Twitter back in March as the UK was entering lockdown and all the spring and summer legal education events were being cancelled or put on hold. We had a simple notion of offering some space where law teachers and legal education researchers could continue to present their ideas and projects. We also thought that such a space could be useful for us to lean on each other and to share thoughts on how to cope with the initial quick pivot to online and then the longer-term planning for creating effective learning in a socially distanced world. Our overarching hope was for the space to be informative, supportive and very informal – to be a break from the busy weeks of emergency planning.

Our first session on 31 March had around 20 participants. Little did we know that we would be completing our 17th hangout in late July with a community of almost 150 law teachers and scholars. They come from over 50 different law schools, mainly from the UK but also from seven other countries. Our heartfelt thanks go to our presenters, panellists and moderators – 44 so far and counting (undergraduate students, Law Commissioners, early career researchers, professors of law, etc) – who have given their time and expertise to make the CLE sessions such an interesting innovation in the legal education sphere.  The SLS and SLSA have helpfully publicised some of our events, but CLE would not have had anything like the reach it has achieved without the support of the Association of Law Teachers and the opportunity provided by Jess Guth and Rosie Fox to publish on this blog.

Connecting Legal Education started as a space for a weekly hangout, but it has evolved into something more. We are now a community where people have connected. We have shared information, perspectives and opportunities, and started to incorporate concrete ideas into our own teaching practices. We have exchanged weather reports, views on lockdown hairdos, learnt a lot about legal education and had a good laugh. Thanks to everyone who has been involved and we look forward to catching up with you all in September.

Please do join us. As ever, if you wish to join the Teams space for the #ConnectLegalEd hangouts, please drop a line to Michael Doherty (m.doherty@lancaster.ac.uk), Lydia Bleasdale (l.k.bleasdale@leeds.ac.uk), or Emma Flint (E.E.Flint@bham.ac.uk).

[1] Obama, Barack. Dreams From My Father: A story of race and inheritance. Canongate Books, 2007